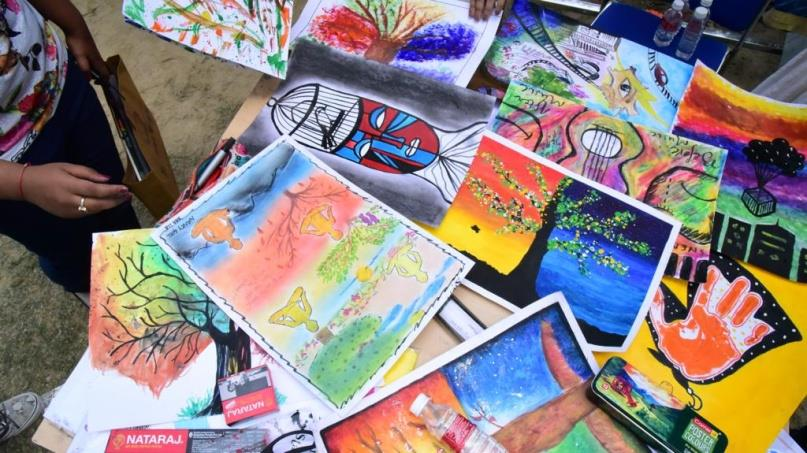 
The Medley of Abstract, Visual and Performative Arts

The Vivekananda School of English Studies (VSES) at Vivekananda Institute of Professional Studies, IPU, organised their first ever annual literary festival-event, Meraki’19 on 25 and 26 March, 2019. The germ of the festival was planted early this year with the vision of celebrating creativity and literature in all its forms.

The festival began with invoking the blessings of the Almighty. The hosts welcomed Internationally acclaimed novelist Ms. Tina Biswas, the chief guest of the day and other delegates. Dr. Salonee Priya, the Associate Dean of VSES also welcomed the gathering and the guest with her warm and cordial words, talked about the literature fest, appreciated the efforts of VSES, and felicitated the day’s chief guest with a shawl, sapling and memento. Dr. Rattan Sharma, the Principal Director also welcomed the chief guest and shared his feelings and love towards literature, emphasising on the significance of literature in our lives. This warm welcome was followed by an invocation song and dance presented by the students of VSES.

Ms. Tina Biswas spoke a few words about her endeavors and her life experiences. She encouraged the students to read more. The lecture captivated the audience’s attention and was followed by an interesting interactive session.

The other faculty members of VSES also congratulated the students for their remarkable spirit and team work.

The festival featured a whole lot of events. Events like creative writing “Ink’redibles”, singing competition “Alankaar” and debate “War of Words” were organized on the first day of the festival. The events were judged by the faculty members of other departments. The festival saw participation from various departments of VIPS. Meraki’19 not just showcased the creative and literary dimension of the students’ personality but their wonderful organizational skills as well. Each of the events held throughout the day highlighted literature beyond what is taught in the classroom. From creative writing to debate, the purpose of this festival was not only to provide entertainment, but to celebrate the very spirit of life.

All the judges and faculty members were extremely kind and supportive and encouraged the students to share their own work and thoughts. Overall, the festival was a grand success. The credit goes to the entire family of VSES who took the initiative, put in their efforts and coordinated with the students for the great outcome.

These two competitions were followed by a fun and hypercompetitive “Lit quiz” conducted in the Vivekananda Hall on the 6th floor of the B Block. There were 10 teams in groups of 2, in total. The participants had eagerly listed themselves for the competition, partnering up with their friends.
There were two rounds in the quiz. The first round consisted of:

By the name of those series, one can already tell how vibrant and competitive the atmosphere was during the quiz. The second round was based on literature we all have read about, but even that proved to be quite difficult for almost all of the participants. A job well done!

After the fun quiz, we had a Story Creation Competition, ‘Penlighten’. The atmosphere was quiet, when one entered in Block-B’s Conference Room. It seemed like committing a crime to make a noise when all of the participants were writing their stories, putting in their heart and soul into it. There were two judges. The participants were given 30 minutes for writing their masterpieces and another 5 minutes to narrate their stories to the world (well, it was just the audience in the conference room, but when you narrate your story out loud, even 2 people would seem like 2,000). The story prompts were given on the spot, quite spontaneous, one would say. The winners were decided on the basis of how well they were able to portray their chosen prompt, how they presented their story and the content quality.

Such a fest deserves a ground breaking closing ceremony, and that is what it got. For the closing ceremony, the students of the English department came together to put forward a musical play of, “My Fair Lady”. The script writing of the writers, the direction of the director and the acting of the actors left everyone present in the Auditorium (Block B), in utter awe. Students from all over the college came to watch the much successful play, accompanied by our college dignitaries.

My Fair Lady is a musical adaptation of George Bernard Shaw’s critically acclaimed work, “Pygmalion”. It is a witty, funny and musical homage to the ultimate “Rags to Riches” story. This play added a major element to our fest and worked as a cherry on top of a delicious pie, wrapping up the fest in the most beautiful way possible.

The winners from the various competitions, from both the days were awarded with various prizes like certificates, cash prize, trophies, etcetera. The award ceremony was followed by a valediction ceremony, which included addresses of the faculty members and the Dean to the students.

After the ceremonies were over, the students and faculty members assembled to have a group photograph of the English department. We did end up with a few decent pictures, thankfully! Students of Vivekananda Institute of Professional Studies, thoroughly enjoyed their first literature fest and are looking forward to next year, when it will be back, even bigger and even better!